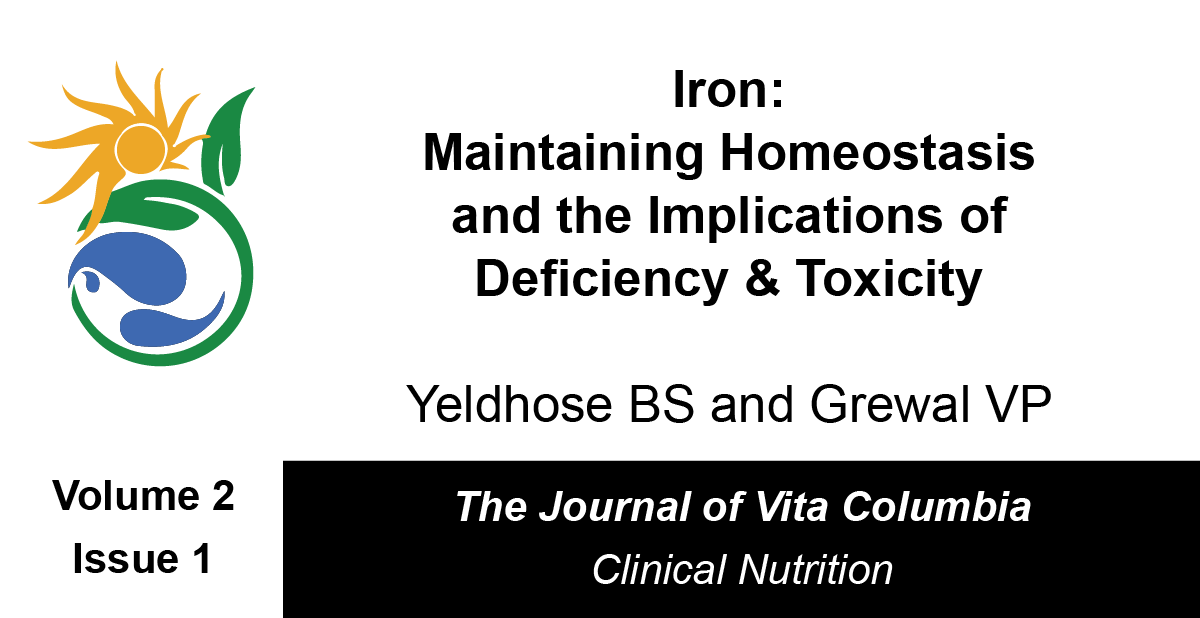 Iron deficiency anaemia is very common across the globe, accounting to 50% of all cases of anaemia. It is one of the common preventable causes of anaemia. Iron is a vital micronutrient required for life sustaining physiological processes. It exists in two forms – haem (animal-based) and non-haem (plant-based). It is absorbed in the duodenum. There is no defined mechanism in place for excretion of iron. Hence, a strict balance of iron intake and absorption is essential to maintain iron homeostasis and thereby prevent iron deficiency and toxicity. This article will focus on the role of iron in human body and the implications it has on its deficiency and toxicity.

A normal adult male has around 3.5g of iron in the body, of which 65% is found in hemoglobin [9]. The rest of the iron is distributed among myoglobin, enzymes, cytochrome, liver, macrophages, reticuloendothelial system, and bone marrow [9]. A normal diet has around 15-20mg of iron. However, our body absorbs only around 1-2mg of iron a day [9]. Our body, on average, needs 20-25mg of iron per day to function [7].  To mention a few, it acts as an oxygen carrier to tissues using hemoglobin and myoglobin, as electron carriers within cells, involved in several enzymatic functions, detoxification of foreign substances in the liver, and so on [5]. Given the high demand for iron in our body, the probability of getting iron deficiency is high. On the contrary, our body lacks a mechanism for excretion of absorbed iron. The main source of iron loss from our body is through bleeding, menstruation, pregnancy, and exfoliation of epithelial surfaces such as skin, genitourinary tract, and gastrointestinal tract. [1] Hence, taking iron in excess amounts predispose us to iron toxicity. Therefore, a crucial balance of iron homeostasis is required for adequate bodily function.

Dietary sources of iron exists in two forms – haem (animal-based) and non-haem (plant based). The richest haem source of iron is lean meat and seafood and non-haem source are nuts, beans, vegetables, and fortified grain products [10]. Public health measures such as fortifying staple food with iron is yet another source [6]. Oral iron supplement is also among the common sources of iron [10]. Fascinatingly, our body also recycles iron from aging erythrocytes, exchanging iron from iron containing enzymes and from iron stores [7].

Iron is mainly absorbed in the duodenum [12]. There are two forms of iron – haem iron which exists in the ferrous form (Fe2+) and non-haem iron, which exists in the ferric form (Fe3+) [1]. Haem iron is readily absorbed by the enterocytes [1]. Non-haem iron, on the contrary, should be first reduced to ferrous form before being absorbed [1]. This is achieved by the action of low gastric pH and by the enzyme named ferric reductase duodenum cytochrome B found in the intestinal membrane [1]. Once converted to ferrous form, it is then readily absorbed to the bloodstream [1].

Iron levels in the body is mainly regulated by controlling its absorption as there is no set mechanism in place for its excretion. A main protein involved with this is hepcidin, secreted by the liver [1]. Its secretion is increased when body iron stores are high, which then inhibits further iron absorption [1]. One drawback with hepcidin is that, it is also secreted at times of inflammatory processes, and causes reduced iron absorption, leading to iron deficiency anaemia [1].

Once the iron is absorbed, it is taken up by transferring which acts as a transport protein to transfer iron to cells or bone marrow for erythropoiesis. Our body also recycles iron from the aging RBCs with the help of macrophages, making then available for synthesis of new RBC [12]. 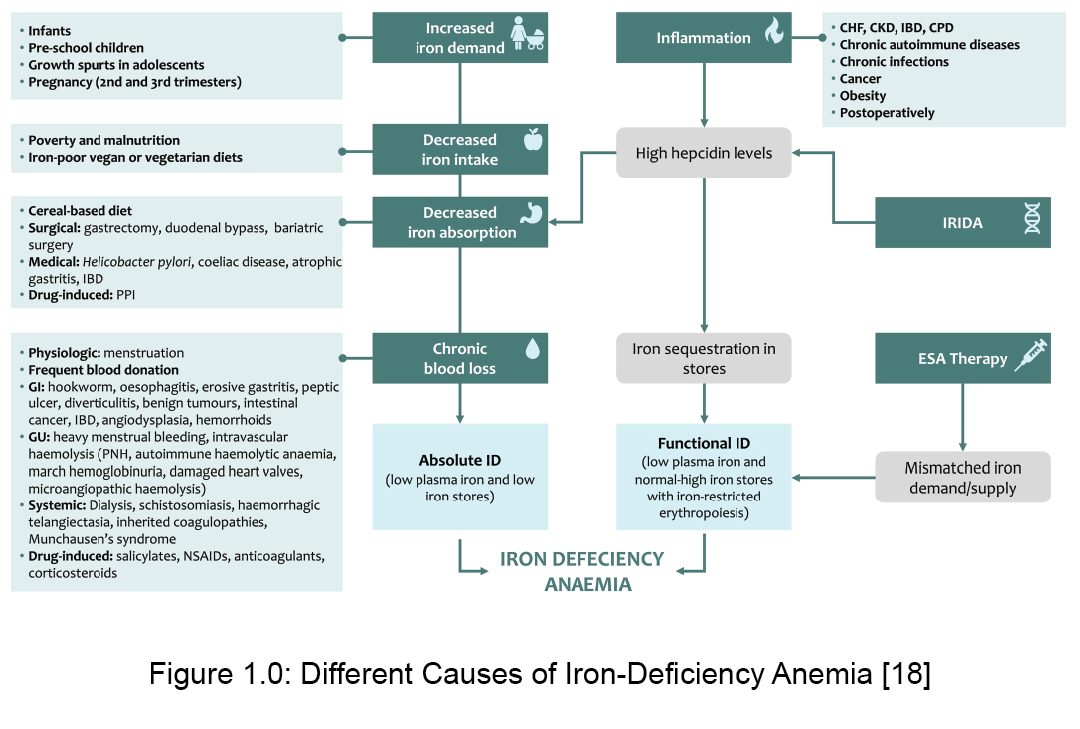 Investigation for iron deficiency starts with laboratory evaluation which will show low hemoglobin, low MCHC, low MCV, and low transferrin saturation [13]. The total iron binding capacity (TIBC) will be raised [3]. Ferritin is yet another parameter that is measured during investigation for iron deficiency. Its level establishes the total body iron stores; a low level of ferritin is seen at times of iron deficiency [3]. However, inflammatory conditions such as acute infection, malignancy and collagen diseases causes ferritin to be acutely raised [13]. In such cases when ferritin becomes an unreliable predictor for iron stores, bone marrow biopsy and iron staining is the gold standard [13]. However, this procedure is rarely performed due to its invasiveness [13]. Once iron deficiency is established, further testing could be performed to identify its causes.

Given the global burden of iron deficiency and its impact on human health, prevention of iron deficiency is a crucial public health need. Public health measures such as increasing availability and consumption of iron rich food and fortifying staple food with iron has been implemented in several countries [4]. Supplementing with oral iron tablets to at risk groups is also an effective strategy [4]. Along with consuming enough quantity of iron, co-consuming ascorbic acid rich food enhances absorption of the consumed iron [4]. On the contrary, calcium, cereal, tea, and coffee inhibits iron absorption. Hence, consumption of these food at different times of consumption of iron rich food enhances iron absorption [4]. These simple public health measures can have significant impact on controlling global iron deficiency anaemia [4].

Once the diagnosis of iron deficiency anaemia is established, acute correction of iron deficiency is best achieved by providing with supplements. Response to oral iron supplements is seen within two weeks, however supplements should be continued for atleast six months to establish iron stores are replenished [13]. On the other hand, during situations of chronic inflammatory conditions, chronic heart diseases, inflammatory bowel disease, and chronic kidney disease, patients does not respond sufficiently to oral replacements [4]. During such situations, IV iron supplements are the preferred choice [4]. Other situations where IV iron is indicated includes malabsorption such as celiac disease, intolerance to oral iron, post-gastrectomy and achlorhydria [13]. Once iron deficiency is corrected acutely, further investigations and treatment is targeted at the cause for iron deficiency.

Children consuming adult preparation of iron is among the most common cause for iron toxicity [14]. In 2015, AAPCC has reported 4072 cases of iron toxicity, of which 3211 were unintentional and 2036 were in children less than the age of 5 [14]. The amount of iron that is tolerated by an individual is dependant on his/her body weight [14]. Table 2 describes the amount of iron that can be consumed a day and the level of toxicity it causes [14]. Table 3 is yet another data set that explains the level of toxicity based on the iron level found in blood sample taken [14]. Iron levels in blood should be measured within 4-6hrs after consumption [14]. This is because iron that is circulating in blood is soon absorbed and deposited in the liver [14]. Hence, measurements taken after this peak is unreliable.

Table 2.0: Daily Consumption of Iron that Can Lead to Toxicity

Table 3.0: Iron Levels in the Blood that Can Cause Toxicity

The toxic effect of iron is divided into five stages as described in Table 5 [14]. However, one may not go through all the five stages, and one may not survive to reach to the fifth stage [14].

Complications from iron toxicity includes liver necrosis, cardiogenic shock, myocardial dysfunction, coma, seizure, coagulopathy, esophagitis, anaemia, ARDS, stricture formation of intestine and gastric perforation [14]. In terms of management, people who have consumed toxic levels of iron, and has been asymptomatic for 4-6hrs does not require any treatment [14]. However, those who had developed GI symptoms and presenting with normal vital signs needs to be observed as they might be in the second stage of iron toxicity [14]. However, if the individual is exhibiting symptoms of haemodynamic instability, they will need aggressive treatment in the intensive care unit [14].

Iron is an important micronutrient performing various crucial function in human body, with its main function being oxygen transport. Most of the iron in human body is found in hemoglobin. Iron is absorbed in the proximal duodenum. Both iron deficiency and toxicity have serious health impacts. Hence, a strict balance of iron levels in the body is crucial for a healthy body.