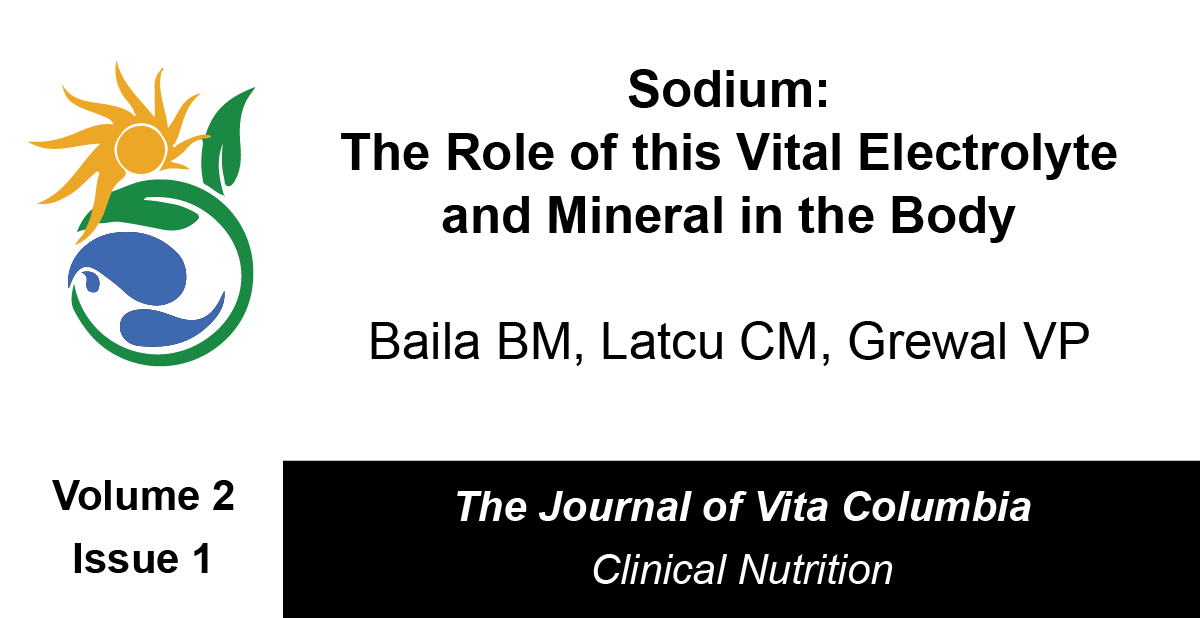 Sodium: The Role of this Vital Electrolyte and Mineral in the Body

Sodium is an essential nutrient involved in maintaining normal cellular homeostasis. Moreover, it plays an important role in controlling fluid and electrolyte balance, as well as  blood pressure. Sodium disorders, hyponatremia and hypernatremia, left untreated, endanger the lives of patients through their involvement in the pathogenesis of some of the main leading causes of mortality and morbidity worldwide, cardiovascular disease.

Sodium (Na) is both an electrolyte and mineral. It helps keep the water and electrolyte balance of the body. It also has a role in nerves and muscles’ function. [1] In body fluids, Na is found in the ionized form (Na +). Sodium is predominating in the extracellular sector where it is the main cation, while potassium is the main cation in the intracellular space. This asymmetric distribution of electrolytes on either side of the cell membrane requires active exchange via Na +/K +-ATPase. The preponderance of sodium over other cations is stored in other body fluids: gastric juice, pancreatic juice, gallbladder, intestinal juice, cecal fluid, sweat, CSF. A relatively large amount of sodium is found in the cartilage and slightly less in the bones. Sodium in the skeleton represents 15-30% of the total amount of the body, an amount of up to 15-30% of it can be exchanged with that of extracellular fluids. The total amount of sodium in the bones increases with age, while the mobilized fraction decreases. This fraction is clinically important in that it is a useful reservoir for sodium loss and acidosis. [2]

Sodium metabolism is regulated by the kidney through the interaction of the renin-angiotensin-aldosterone system, sympathetic nervous system, atrial natriuretic peptide, brain natriuretic peptide, effective circulating volume, and serum H2O content. H2O metabolism is tightly regulated by arginine vasopressin. [3] Most of the sodium in the body (approximately 85%) is found in blood and lymphatic fluid, sodium levels of the body are partially controlled by a hormone called aldosterone, secreted by adrenal glands. Aldosterone levels transmit to the kidneys when retaining sodium in the body, instead of passing it in the urine. The balance of sodium between the three spaces is made through the separation membranes, by diffusion together with other substances (water, K, amino acids, etc.) and by active processes with various speeds. The total amount of Na in the body is 3,500-4,500mEq, found in two osmotically inactive forms: 500mEq in connective tissue, cartilage and 1,400-1900mEq in bones, skin tissue and adipose tissue.  Around 30% of Na is osmotically active and participates in the development of voltage-osmoregulatory processes. In the blood, Na circulates in two forms: bound and in an ionic state, chemically active. The value represents a biological constant with tight variation limits hyponatremia 136mEq and hypernatremia 160mEq. Exceeding these limits is accompanied by serious conditions such as “noncommunicable diseases including hypertension and cardiovascular disease” [20] that, untreated, could become life-threatening. [4]

Sodium is an essential nutrient found in salt and many foods (mainly processed and ready-made ones). Our bodies need a small amount of sodium to be healthy, but too much can lead to high blood pressure, a major risk factor for cardiovascular disease (stroke, heart disease, etc) and kidney disease. Sodium intake has also been linked to an increased risk of osteoporosis, stomach cancer and severity of asthma. It is recommended (referred to as Adequate Intake-AI) that people over the age of one year consume between 1000-1500 mg sodium per day. People aged 14 and over should not eat more than 2300 mg sodium per day, based on the 2015–2020 U.S. Dietary Guidelines, referred to as the Tolerable Upper Intake Level (UL). An adult sodium intake above 2300 mg per day is likely to pose a health risk.[5][20]

The 2020-2025 Dietary Guidelines for Americans recommend that Americans consume less than 2,300 milligrams (mg) of sodium each day as part of a healthy eating pattern. [6] About 70% of the sodium consumed comes from processed, ready-made and restaurant foods, so only a small amount of sodium or salt is added to cooking and meals. [7] Based on data showing that 500,000 deaths each year are related to high blood pressure and that the risk of CVD increases by up to 6% for each 1 gram increase in sodium intake per day, reducing sodium intake becomes a priority in prevention of thousands of deaths annually. [8][20]

It is recommended to look after sodium quantities in particular foods by reading the Nutrition Facts label. People should choose foods with less than 120 milligrams of sodium per serving.

Restriction of sodium intake can be made by consuming a variety of fruits and vegetables regularly in the diet. For frozen products, people should look for ones without added sauces or sodium and if choosing canned vegetables, a selection of low-sodium or no-salt-added items is a good idea.  In addition to this, another way is to limit the intake of highly processed foods and avoid added salt in meals. [19]

Common Causes of hyponatremia include:

Signs and Symptoms of Hyponatremia

Symptoms depend on the degree of hyponatremia and velocity of progression from the onset. If the onset is <24-48h is called acute hyponatremia and is more likely to be symptomatic, whereas chronic hyponatremia (>24-48 h) is less likely to be symptomatic due to adaptation. In other words, normalization of brain volume through loss of cellular electrolytes within hours and organic osmolytes within days. [11] Symptoms can be absent, mild, or severe. Mild symptoms include headaches, nausea, and balance issues.  Severe symptoms include confusion, seizures, and coma. [12][13]

Complications are seizures, coma, respiratory arrest, permanent brain damage, brainstem herniation, death. In case of rapid correction of hyponatremia, there is a risk of brain cell shrinkage which can develop osmotic demyelination of pontine and extrapontine neurons. Untreated can be irreversible such as central pontine myelinolysis. [11]

In case of mild hyponatremia (no symptoms) the main treatment would be fluid restriction. However, the treatment in case of moderate to severe hyponatremia (confused, seizures) are saline infusion with loop diuretics, hypertonic (3 percent) saline, checking serum sodium frequently and ADH blockers (conivaptan, tolvaptan). Correction of serum sodium should be less than 10–12 mEq/L in the first 24 hours or less than 18 mEq/L in the first 48 hours. Otherwise, there is a high risk of central pontine myelinolysis. [14]

Hypernatremia is a common electrolyte problem that is defined as a rise in serum sodium concentration to a value exceeding 145 mmol/L. It is a frequently encountered electrolyte disturbance in the hospital setting, with unappreciated high mortality. Understanding hypernatremia requires a comprehension of body fluid compartments, as well as concepts of the preservation of normal body water balance. The human body maintains a normal osmolality between 280 and 295 mOsm/kg via Arginine Vasopressin (AVP), thirst, and the renal response to AVP; dysfunction of all three of these factors can cause hypernatremia. [15] Common causes are inadequate H2O intake (elderly/disabled) or inappropriate excretion of H2O, diuretics, Li, and diabetes insipidus.[11]

Signs and Symptoms of Hypernatremia

The major symptom is thirst. The most important signs result from brain cell shrinkage and include confusion, muscle twitching or spasms. With severe elevations, seizures and comas may occur. [16] Values above 180 mmol/L are associated with a high mortality rate, particularly in adults. [17]

Treatment of hypernatremia is based on salt restriction and administration of normal saline until the patient is hemodynamically stable. When the vitals are stable, it is recommended the administration of half-normal saline. Correction of serum sodium should be less than 12 mmol/L in 24 h drop in Na+ (0.5 mmol/L/h) due to risk of cerebral edema, seizures, death otherwise. [11] 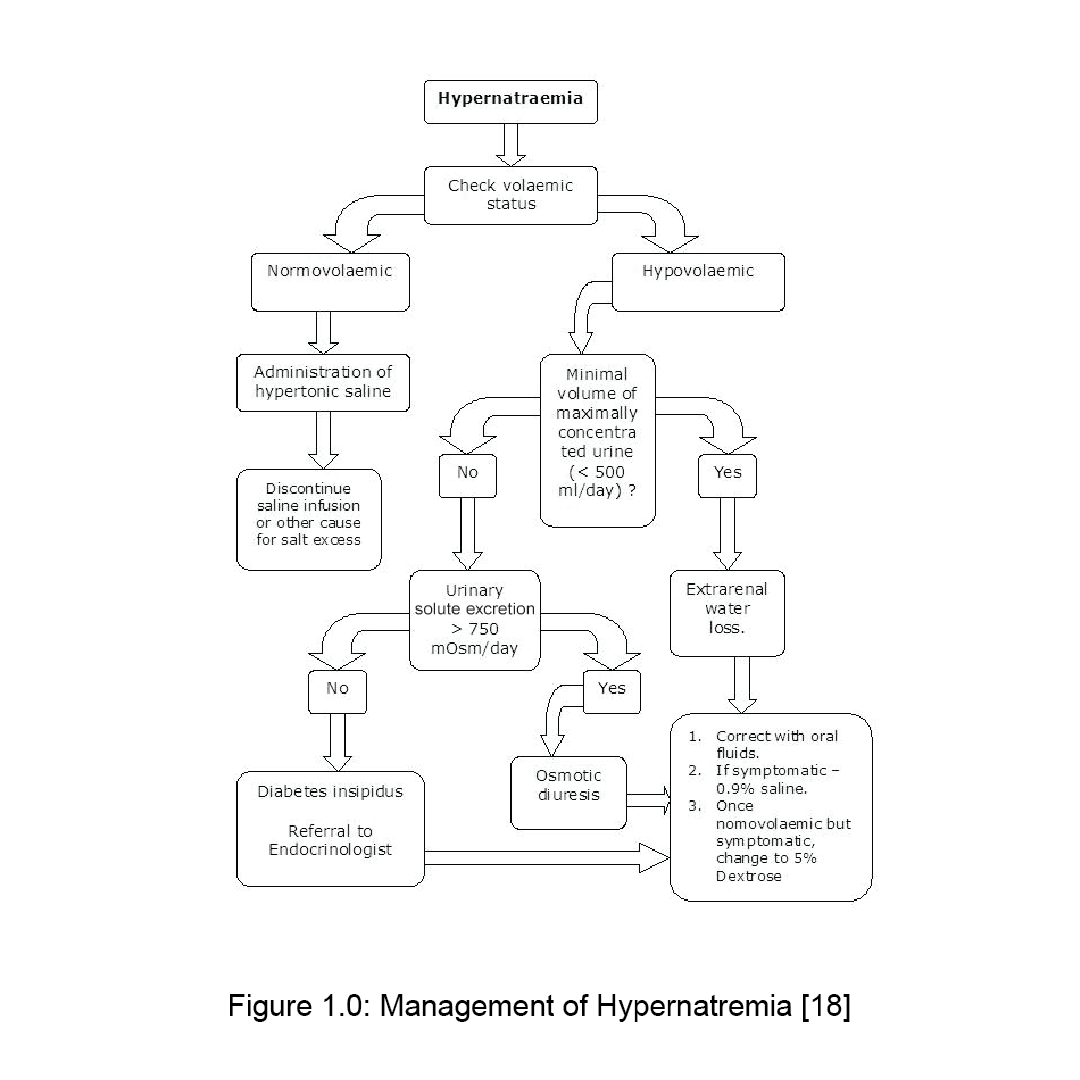 A balanced lifestyle, based on maintaining a healthy sodium intake, leads to an equilibrium that helps maintain homeostasis and the well-being of the cardiovascular system. Further studies would emphasize the relationship between the amount of sodium administered/consumed and the response in the body that would facilitate the approach to nutrition and management based on sodium.