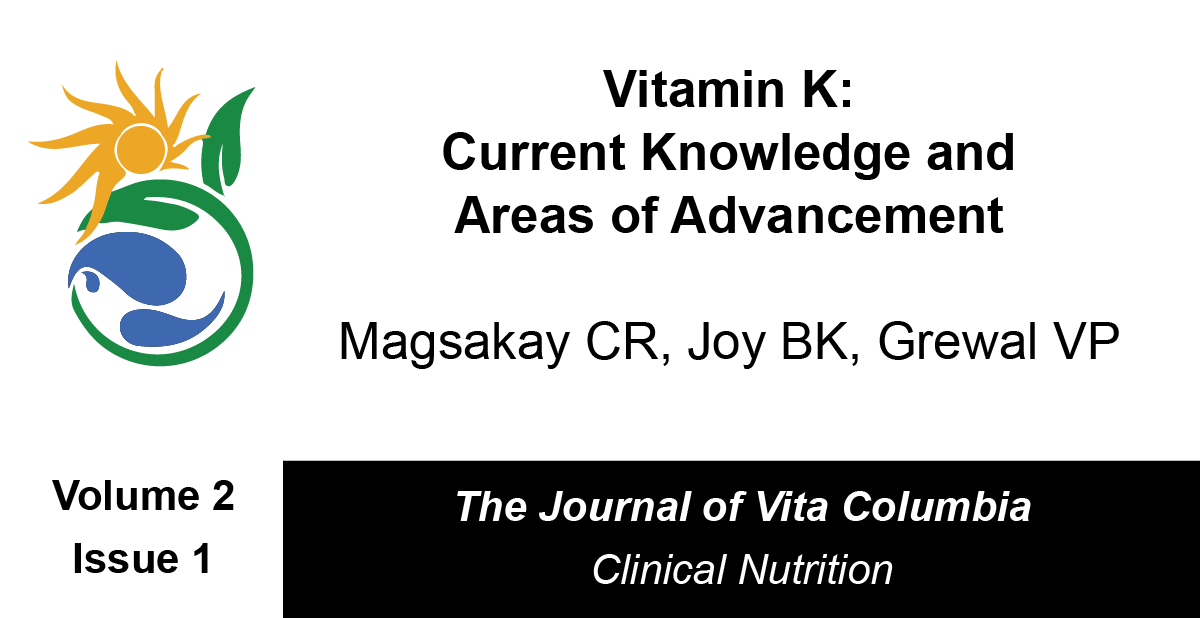 Vitamin K is recognized for its important role in blood coagulation. Little did we know that it has other vital functions in the human body. Current research findings show its function in bone mineralization, inhibition of vascular calcification, tumor suppression, and inducing insulin sensitization. These benefits offer novel supportive approach in the management of certain diseases including Covid-19.

Vitamin K is a fat-soluble vitamin and its long time well-known function within the body is in the production of coagulation factors (II, VII, IX, X, protein C, and protein S). Moreover, Vitamin K is also involve in the formation of bones (osteocalcin), anticalcification (matrix-Gla protein), cancer prevention and as an insulin sensitizing molecule. Vitamin K is available naturally as Vitamin K1 (phylloquinone) and Vitamin K2 (menaquinone). Vitamin K1 is mostly found among green leafy vegetables (broccoli, brussels sprouts, cabbage, kale, kai-lan, etc.).1 Dark leaf color has more substantial amount of phylloquinones. The other sources of phylloquinone are found in certain plant oils such as soybean, canola, cottonseed, and olive.2 The recommended adequate intake of phylloquinone is 90 μg/day for women and 120 μg/day for men..3 Menaquinones, on the other hand, are found in foods of animal in origin, like bovine liver, and in foods which are fermented with bacteria such as yogurt and other types of cheese. They differ in structure from phylloquinone in their 3-substituted liphophilic side chain. The major menaquinones has 4-10 repeating isoprenoid designated by MK-4 to MK-10.2 The most important menaquinones which has preventive and therapeutic values are menaquinone-4 (MK-4) and menaquinone-7 (MK-7).4 Natto, a traditional Japanese food, which is made from bacterially fermented soya beans, has the richest source of MK-7 with 10 μg/g. Another form of Vitamin K is Menadione (K3). It is not considered a natural form of Vitamin K but a synthetic equivalent that function as a provitamin. Once absorbed in the body, K3 becomes alkylated into a biologically active isoprenylated menaquinones. The difference of K3 among the other vitamins is that it has limitations in its function. K3 is unable to apply all the functions of the natural forms of Vitamin K.14 However, vitamin K3 has been found out to exhibit antitumor activity.

The classic role of Vitamin K is in the production of proteins needed for coagulation. This is exemplified in vitamin K deficiency states as seen in newborns. In the classic Hemorrhagic Disease of the Newborn (HDN), vitamin K deficiency may cause unexpected bleeding in 0.25% to 1% neonates in the first week of life.5 The administration of a single dose of 0.5 to 1.0 mg of Vitamin K as prophylaxis in newborns has been well-established in the prevention of the classic hemorrhagic disease of newborn. In infants aged 2 to 12 weeks who are exclusively breast-fed and have received no or inadequate vitamin K prophylaxis, a condition known as late hemorrhagic disease of newborn may occur. Infants who have malabsorption defects in the intestine (cholestatic jaundice, cystic fibrosis, etc.) may also manifest with late hemorrhagic disease of the newborn. The administration of parenteral neonatal vitamin K prophylaxis is shown to prevents the development of late HDN. 5

Vitamin K is an essential cofactor for the carboxylation of osteocalcin that helps in bone formation.6 Vitamin K and 1,25-dihydroxyvitamin D [1,25 (OH)2D; calcitriol] regulate the activation and production of osteocalcin. The transcription of the osteocalcin gene is supported by 1,25 (OH)2D, while vitamin K assists in the posttranscriptional carboxylation of Gla residues in the osteocalcin propeptide.4 Additionally, it was established that 1,25 (OH)2D complements the activity of γ-glutamyl carboxylase, which implies that the carboxylation of osteocalcin is accelerated by Vitamin D and that MK-4 activates 1,25-dihydroxyvitamin D3-induced mineralization by human osteoblasts. Both vitamin K and vitamin D are involved synergistically on bone health. Thereby, low vitamin K status was identified to be linked with low bone mass, osteoporosis, and fracture risk.7 In the Nurses’ health study, which is a 10-year prospective study of women aged 38-63, it was found out that undercarboxylated osteocalcin can be lowered with high intakes of Vitamin K-rich foods and that there is a positive association with risk of hip fractures with undercarboxylated osteocalcin. It was observed that an increased risk of hip fracture was seen in women with lowest vitamin K intake.8 In the Framingham offspring study conducted to determine the effect of vitamin K intake in bone mineral density, it was determined that low dietary phylloquinone intake was associated with low bone mineral density. The results of this study promoted support to the assumption that vitamin K is a reversible factor that help reduce bone loss due to aging.9 Patients who have chronic renal failure also undergo bone mineral disturbances. In the study conducted by Kohlmeier et al, they investigated a total of 68 patients (33-91 years) on hemodialysis and analyzed the association between biochemical indicators of vitamin K nutrition and bone metabolism, and related fracture risk. After a four-year follow-up period, there were 41 patients who did not develop any fracture and it was notable that these patients have close to three times higher concentrations of phylloquinone than the nine patients with fracture.10

While vitamin K plays a significant role in the carboxylation of osteocalcin which helps in the formation of bones, the vitamin K-dependent Matrix Gla Protein (cMGP) prevents blood vessels from developing calcification from calcium overload.4 The matrix Gla-protein was discovered in human atherosclerotic plaque where its role help prevent the precipitation of calcium as what it does in bone. It was assumed that a diet with insufficient intake of vitamin K may also lead to under carboxylation of vascular matrix Gla protein which may result to calcification of atherosclerotic lesions, and, therefore, a heightened risk of developing coronary heart disease. In the Rotterdam Study conducted to determine the association of dietary intake of Menaquinone with Coronary Heart Disease, they have observed that dietary menaquinone intake has a protective effect from coronary artery disease in older men and women as determined by the inverse association with all-cause mortality. The patients in the highest quartile for K2 intake had a median intake of 40.9 μg/day. Moreover, cancer risk does not rise with high menaquinone dietary intake.11 On the other hand, phylloquinone intake had no association with coronary heart disease, mortality, or in the calcification of aorta. Gast et al also did a study similar to the Rotterdam study, where they also found an inverse relationship with menaquinone dietary intake and coronary heart disease. The protective effect of Vitamin K2 is manifested in subtypes MK-7 through MK-9.12 However, more studies should be done in the future to determine the adequate dose of Vitamin K in the prevention of coronary heart disease.

There are numerous vitamin K dependent proteins that are identified as specific ligands for tyrosine kinase receptors. These receptors play a significant role in cell signaling processes like cellular survival, transformation, and replication. Vitamin K3, Menadione, possess antitumor activity and has been studied since 1947. Oztopcu et al reported that vitamin K has possible antiproliferative effect on both C6 and the low passage human glioma cells. When these cell types are compared, the antiproliferative effect of vitamin K3 was stronger on the human glioma cells than on C6 cells.15 Jamison et al showed that the combination of vitamins C and K3 resulted in the inhibition of growth in prostate cancer cells, potentiation of cancer chemotherapy and radiotherapy and reduced the incidence of cancer metastases. This vitamin combination may be considered as an alternative, non-toxic adjuvant cancer treatment, which may be considered in clinical cancer therapy.16 Although most anticancer research studies in vitamin K focused on vitamin K3, there were also studies that presented the effects of K1 and K2 on anticancer cells. In the study of Prasad Et al, they observed that vitamin K3 inhibited the growth of neuroblastoma, melanoma and glioma cells cultured in serum-supplemented medium in rats. In comparison to glioma or melanoma cells, neuroblastoma cells were more sensitive to vitamin K3. Vitamin K3 was more efficacious than vitamin K1.17 Haruna et al showed that sorafenib + vitamin K2 combination treatment had a much higher response (27.3%) than sorafenib only (4.5%) in the treatment of Hepatocellular carcinoma. The median time of progression free survival was increased in the vitamin K-dosed group compared with the sorafenib alone group. In the vitamin K-dosed group, 75% of patients with tumor size reduction achieved a complete response or partial response, while only 13% of patients with tumor size reduction showed a partial response in the sorafenib only group. The study demonstrated that Vitamin K alone may not weaken tumor growth and that the combination of vitamin K with sorafenib could enhance antitumor effects.18 More studies are needed to determine the role of vitamin K in tumor reduction either acting alone or in combination with other chemotherapeutic agents.

The protective effect of Vitamin K2 is also observed in patients with Diabetes Mellitus. However, there is limited evidence that vitamin K is inversely associated with insulin resistance. Under-carboxylated osteocalcin was observed to function as an endocrine hormone which affects the metabolism of glucose in mice.19 It has been proposed that vitamin K, which converts the uncarboxylated osteocalcin to a carboxylated form, helps regulate glucose metabolism through modulating osteocalcin and/or proinflammatory pathway. In the study of Choi et al, they have demonstrated that vitamin K2 supplementation for 4 weeks increased the insulin sensitivity in healthy young males which is related to increased carboxylated osteocalcin rather than inflammatory modulation.20  Yoshida et al showed in their study that a daily supplementation of 500ug of phylloquinone for 36 months had a protective effect on progression of insulin resistance in older men.21 In another study conducted by Yoshida et al, they confirmed that a higher phylloquinone intake was associated with greater sensitivity of insulin and glycemic status as measured by 2-hour post-oral-glucose-tolerance test insulin, glucose, and insulin sensitivity index in a community-based sample of men and women.22

Vitamin K is an important factor in the activation of pro and anti-clotting factors in the liver and Protein S outside of the liver (local antithrombotic). Beyond coagulation, Vitamin K also plays an important role in other tissue functions like soft tissue calcification and elastic fibre degradation, which is mediated by Matric Gla Protein, a vitamin K dependent inhibitor. It is observed that in Covid-19 patients these functions are altered leading to lung fibrosis. The study also demonstrated significantly low levels of vitamin K in sick Covid-19 patients23. Another study conducted in hospitalised Covid-19 patients showed that low levels of vitamin K has been associated with higher mortality in sick patients24. More trials have to be conducted to learn about the  potential role of vitamin K in the treatment and progression of Covid-19.

The role of vitamin K encompasses its well-known function in coagulation. It is noteworthy that vitamin K is a powerful and essential vitamin that prevents fractures, vascular calcification, cancer, and promotes insulin sensitivity in patients with Diabetes Mellitus. The findings stated in numerous studies investigating the action of vitamin K in certain diseases may help clear novel properties of vitamin K and its protective effect in human health. Future studies should also explore the appropriate dosing of vitamin K supplementation required in the prevention of these diseases.