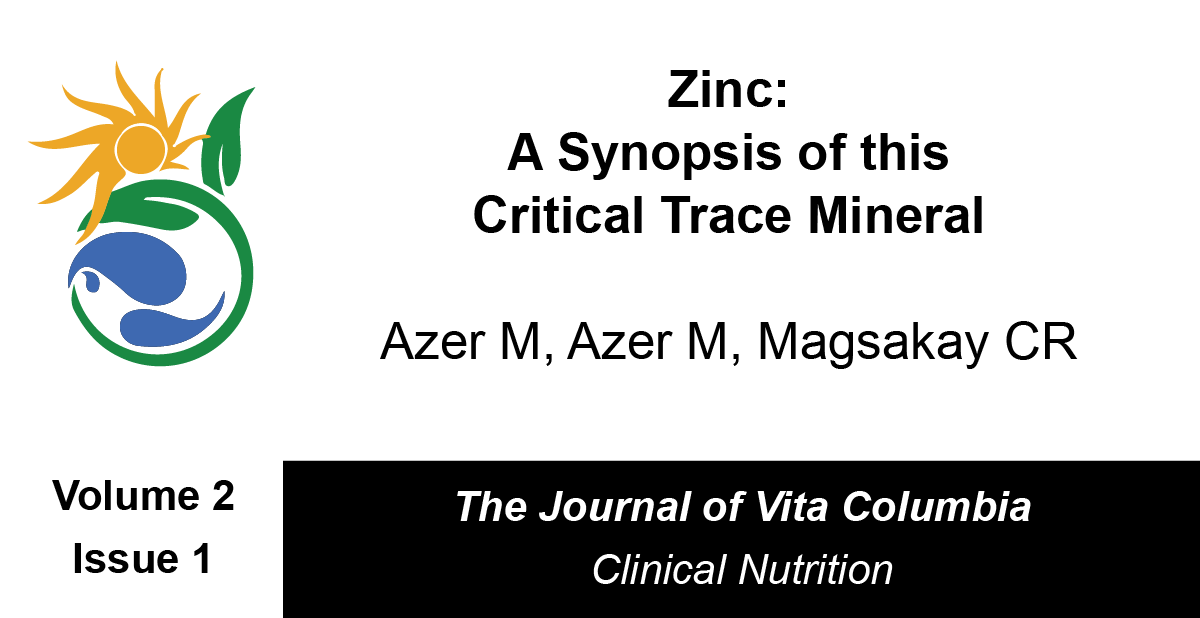 Zinc: A Synopsis of this Critical Trace Mineral

Zinc is one of the most crucial and most abundant minerals in the human body. Like most minerals, its deficiency leads to non-specific signs and symptoms. While it is common though, it is crucial to the immune system of the body and its deficiency and toxicity can lead to hazardous states which may be catastrophic in one’s health.

Zinc is the second most abundant trace mineral in the human body after iron, and is present in every cell. (1) Zinc can be found in many animal and plant food sources, but its highest levels exist in shellfish, salmon, lobster, beef, pork, lamb, chicken, milk and milk products, eggs, lentils, beans, oats, peas, asparagus and mushrooms. (1) However, zinc from animal products is absorbed more efficiently than from plant-based products. (1)

The Role of Zinc in the Human Body

Some groups are more at risk of zinc deficiency than others, such as sickle cell anemia patients (1), those with eating disorders (bulimia or anorexia) (1), patients with chronic kidney disease (1), people with alcohol abuse disorder (1), vegetarians and vegans. (1) Pregnant and lactating females (1), those with poor dietary intake (1), liver cirrhosis (2), gastrointestinal diseases (inflammatory bowel disease, short bowel syndrome, malabsorption (3), older infants (7-12 months old) who are exclusively breastfed (3), diabetes (3) and those with malignancy (3) are also susceptible to zinc deficiency.

It is estimated that around 2 billion people worldwide are deficient in zinc due to inadequate dietary intake. (1) Symptoms of mild zinc deficiency include diarrhea, decreased immunity, thinning hair, decreased appetite, mood disturbances, dry skin, fertility issues and impaired wound healing (1). In severe zinc deficiency, there is impairment in growth and development, delayed sexual maturity, skin rashes, chronic diarrhea, generalized hair loss, impaired wound healing, poor sense of taste and smell, irritability and behavioral changes (1, 2). Severe deficiency can also impair the immune system as it can depress neutrophils, macrophages and complement activity. (3) Also, it decreases lymphocytes proliferation and activation. This results in increased risk of pneumonia and other infections especially in extremes of age (3).

Since zinc deficiency impairs immune system function, it’s thought to cause over 450,000 deaths in children under 5 every year (1). In truly severe cases, it can also lead to acute diarrhea which is a significant cause of mortality among children in developing communities (3).

The treatment for zinc deficiency is fairly simple. Firstly, the recommended daily dose is 11 mg for men and 8 mg for women (except pregnant and lactating who need around 14-19 mg daily). If a higher dose is needed, it should be recommended and monitored by physicians only; however, the daily dose should not exceed 40 mg to avoid toxicity. (2) The National Institutes of Health consider 40 mg of zinc a day to be the upper limit dose for adults and 4 mg of zinc a day the upper limit for infants under age 6 months. (4) The preferred means of administration are zinc citrate and zinc gluconate as these forms are more easily absorbed. (1)

There are several uses of zinc. Zinc is commonly used in hospitals as a treatment for burns, ulcers and other skin injuries. Also, for uncontrolled acute childhood diarrhea the World Health Organization and UNICEF recommend short-term zinc supplementation (20 mg of zinc per day, or 10 mg for infants under 6 months, for 10–14 days) (3). Many studies have even confirmed that zinc supplementation may improve many conditions such as Wilson’s disease, diabetes mellitus, depression, ADHD, macular degeneration, leprosy, warts, acne and gingivitis (2).

Zinc toxicity can occur due to ingestion of 100 m daily or taking high doses for many consecutive years, this can double the risk of prostate cancer (2). Ingestion of 10 gm of zinc at once can be fatal (2).

Taking high amounts of zinc can also affect the absorption of other nutrients such as copper and iron (1).  Zinc can increase the effect and the side effects of cisplatin. (2) On the other hand, zinc can be affected by medication, for example some diuretics such as thiazides increase urinary excretion of zinc, decreasing its level in blood. (3)

In conclusion zinc is required for life, while in deficiency states it may be easy to treat, zinc toxicity can lead to various signs and symptoms, up to and including cancer. Like many minerals that are used by the body, symptoms are vague and non-specific; however, there are certain key signs to look for, such as an impaired immune system, that elucidates the possibility of zinc deficiency.