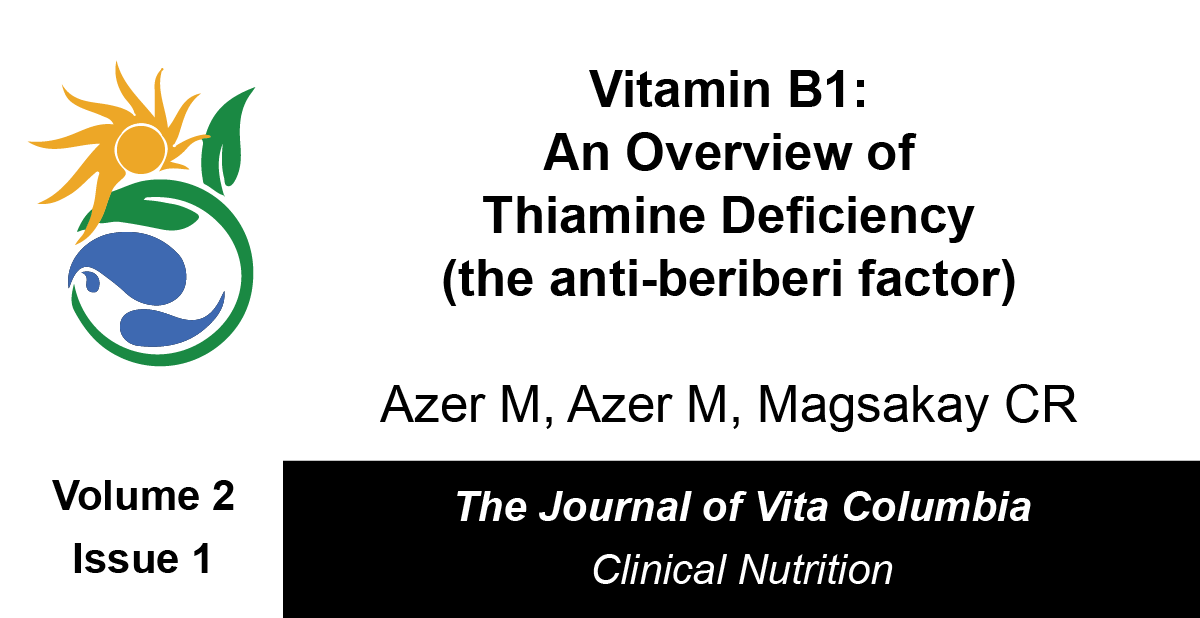 Vitamin B1: An Overview of Thiamine Deficiency (the anti-beriberi factor)

Beriberi, or hypovitaminosis B1, is a thiamine deficiency characterized by one of 3 states, either dry (neurological), wet (cardiovascular) or infantile beriberi. Thiamine, vitamin B1, is the second essential vitamin to be discovered. Thiamine can’t be stored in the body, so it must be ingested regularly in order to stay healthy and fit. In different groups of people, vitamin B1 was found out to be low in levels, whether in the poor who can’t afford a variety of foods, or in the rich who eat highly specialized foods, or even those out in the open sea with only enough food for a limited period. It will take some time for one to reach a state of Beriberi and the solution is just simple, supplement with thiamine. In fact, as long as you haven’t gotten to the stage where you manifest with neurological deficits, you still may have a good prognosis.

Beriberi, a disease prevalent in South Asia in the last few centuries. It was a mysterious condition with a wide variety of symptoms ranging from weight loss, paralysis, nerve dysfunction up to brain damage and death. The word “beri” means ‘weak’ or ‘I can’t’ in Sinhalese – the Sri Lankan native tongue. (1)

By the late 19th century, it was considered a serious problem among the Japanese sailors, being so mysterious, it was believed to be a kind of infectious disease. Dr. Takaki Kanehiro, however, after an exhaustive study of the cause of this strange disease and through keen observation, managed to link it to the poor diet of Japanese sailors, which consisted solely of rice. (1)

A few years later, a Dutch physician – Dr. Christian Eijkman, noticed that beriberi is more common among rich people in Europe rather than poor communities. He suspected that the reason for this is the high quality polished rice that was only affordable for the wealthier families, whereas the poorer farmers usually eat unpolished rice with the kernel and husk intact. (1)

An experiment was made on chickens to prove this point, it showed that chicken which was offered polished rice showed symptoms of beriberi and recovered when offered unpolished rice. (1)

In 1912 a chemist named Casimir Funk managed to isolate the anti-beriberi factor from the brown rice and called it “Vitamin” which means ‘an amine vital for life’. Later, this anti-beriberi compound was named “Thiamine” which means ‘a sulfur containing amine’. Vitamin A was already discovered so Thiamine was called vitamin B1 (1).

What is Vitamin B1 (Thiamine)?

So what is Thiamine? Simply put, Thiamine is a water soluble vitamin which acts as a coenzyme and has an important role in carbohydrate metabolism (2). It also plays a vital role in transferring nerve impulse and in myelin sheath stability (5). The human body can’t produce thiamine and can only store around 30 mg of it in the body, so it must be eaten in food. Its absorption occurs in the small intestine, specifically in the jejunum (2). Vitamin B1 exists in whole grain foods, green leafy vegetables, milk products, nuts, pork, fish, eggs and beef (2). However, there are foods that contain Thiaminase, an enzyme that breaks down Thiamine, which are found in shellfish, tea and coffee (2).

There are 3 primary causes for thiamine deficiency:

It happens due to myelin sheath degeneration without ongoing inflammation and may manifest as follows:

In western countries, a severe variation of dry beriberi called Wernicke’s Encephalopathy (WE) is more common especially among people with chronic alcoholism, as around 80% of people with chronic alcoholism develop thiamine deficiency. This is because ethanol consumption decreases the absorption of thiamine in the gastrointestinal tract which affects thiamine stores in the liver impairing thiamine phosphorylation. (2,4)

In WE, ocular manifestations are most prominent specifically nystagmus, lateral rectus and conjugate gaze palsies due to oculomotor and abducent nuclei involvement.

Wernicke’s Encephalopathy is manifested by: (4)

Korasakoff is a late, more severe presentation of Wernicke Encephalopathy which is characterized by retrograde and anterograde amnesia with confabulation. It usually starts with gastrointestinal symptoms such as nausea, vomiting, and abdominal pain. These symptoms are usually followed by fever, ataxia, nystagmus, ocular nerve palsy with progressive mental impairment. Eventually Korsakoff Syndrome develops as memory is affected and psychosis develops. Once Korsakoff Syndrome develops the chances of improving or returning to a state of well-being diminish significantly. (2,4,5)

Widespread peripheral vasodilation leads to hypotension and activation of the renin-angiotensin-aldosterone system resulting in salt and water retention and volume overload, this eventually results in high output congestive heart failure. (2)

Cardiac symptoms may manifest as: (2)

Acute fulminant form of cardiovascular beriberi called “Shoshin beriberi”. It is a rapid severe form of wet beriberi where the heart is affected tremendously trying to meet high body demands. Aside from edema, the patient may suffer from cyanosis, tachycardia, distended neck veins and restlessness. In this stage, cardiac support is a critical part of treatment along with thiamine supplementation. This avoids the sudden vasoconstriction which may happen before the cardiac muscle recovery and may result in low output heart failure. (2)

This happens in infants who are exclusively breastfed by a mother who is thiamine deficient.

The symptoms may include:

Diagnosis of Vitamin B1 (Thiamine) Deficiency:

In most cases, thiamine administration is the most practical test, if the patient responded to the treatment, then it confirms the diagnosis. If lab testing is needed, thiamine blood level is measured. The test of choice, however, is the thiamine loading test which is the best indicator of thiamine deficiency. A rise of 15% or more in enzyme activity is positive for thiamine deficiency; however, this test is time consuming and expensive that is why it is rarely used in daily practice.

Treatment of Vitamin B1 (Thiamine) Deficiency:

The prognosis? Despite the severity of symptoms and that beriberi can be quickly fatal, it’s easily treatable and most of the symptoms resolve with thiamine supplements. Cardiac symptoms are the best to respond to treatment, it resolves in around 24 hours of treatment. Dry beriberi symptoms may improve however once Korsakoff syndrome is developed, minimal improvement is expected. (2)