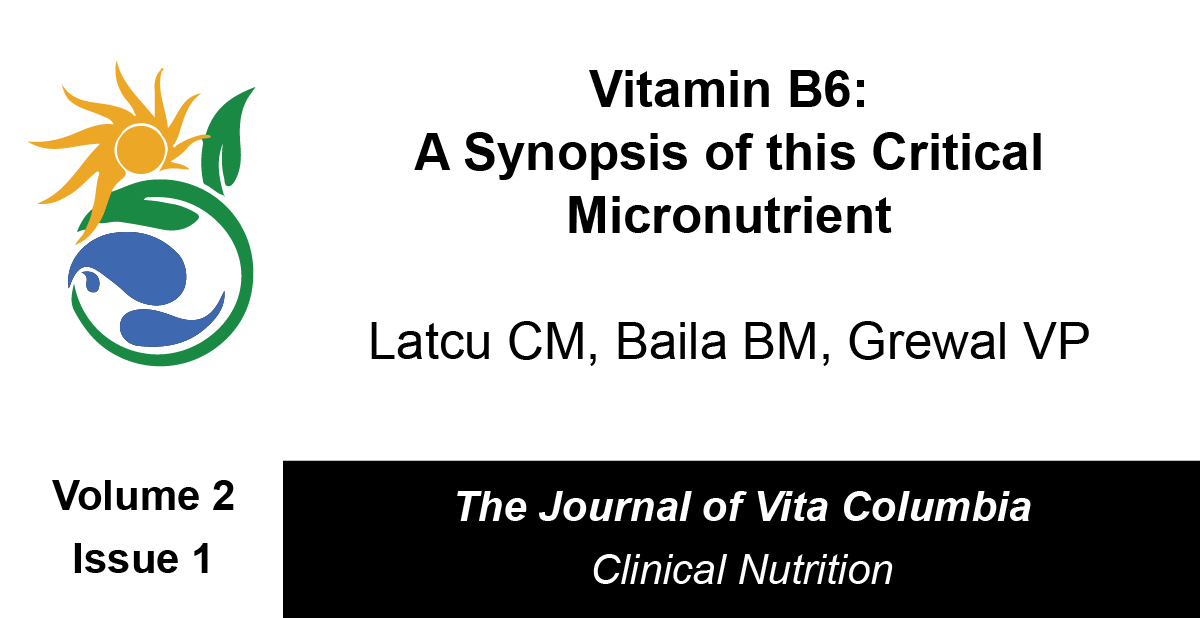 Vitamin B6: A Synopsis of this Critical Micronutrient

Vitamin B6, first discovered as a factor that cured dermatitis in rats, is a water-soluble vitamin that works as a coenzyme for more than 100 essential enzyme-catalyzed reactions. It is rapidly metabolized and excreted. Therefore it is very unlikely that vitamin B6 deficiency or toxicity happens. In case of toxicity nerve damage-related symptoms and other symptoms can occur. Its most biologically active form, PLP – pyridoxal 5’-phosphate form, and its dependent enzymes play an important role in cellular metabolism and other important reactions. Finally, vitamin B6 is catabolized through the oxidation of pyridoxal to 4-pyridoxic acid, which is excreted in the urine. Besides all these general characteristics of this vitamin, studies also outline new insights into its impact on human health and the use of vitamin B6 supplements.

Vitamin B6 (Vit. B6), also called pyridoxine, part of the group of vitamin B complex, water-soluble, chemically quite distinct compounds, is a really important compound for overall cellular metabolism being involved in amino acid biosynthesis and degradation, also in glucose and fatty acid metabolism. [1]

Vit. B6 consists of a group of six related vitamers: pyridoxal (PL), pyridoxine (PN), pyridoxamine (PM) and the 5′-phosphates (PLP- pyridoxal 5’-phosphate, PNP- pyridoxine 5’-phosphate and PMP – pyridoxamine-5’-phosphate). The animal tissues contain mainly the PLP and PMP forms, and plant-based products the PN and PNP forms. Humans have 4-pyridoxic acid (4-PA) as their main excretory form. PN, PL and PM forms are mainly converted to PLP via some consecutive reactions that require a kinase (whose role is to phosphorylate the 5′hydroxymethyl group) and the pyridoxamine phosphate oxidase – PNPO (whose role is to phosphorylate the PNP and the PMP). The PLP is the biologically active form of vitamin B6.  [2][4] 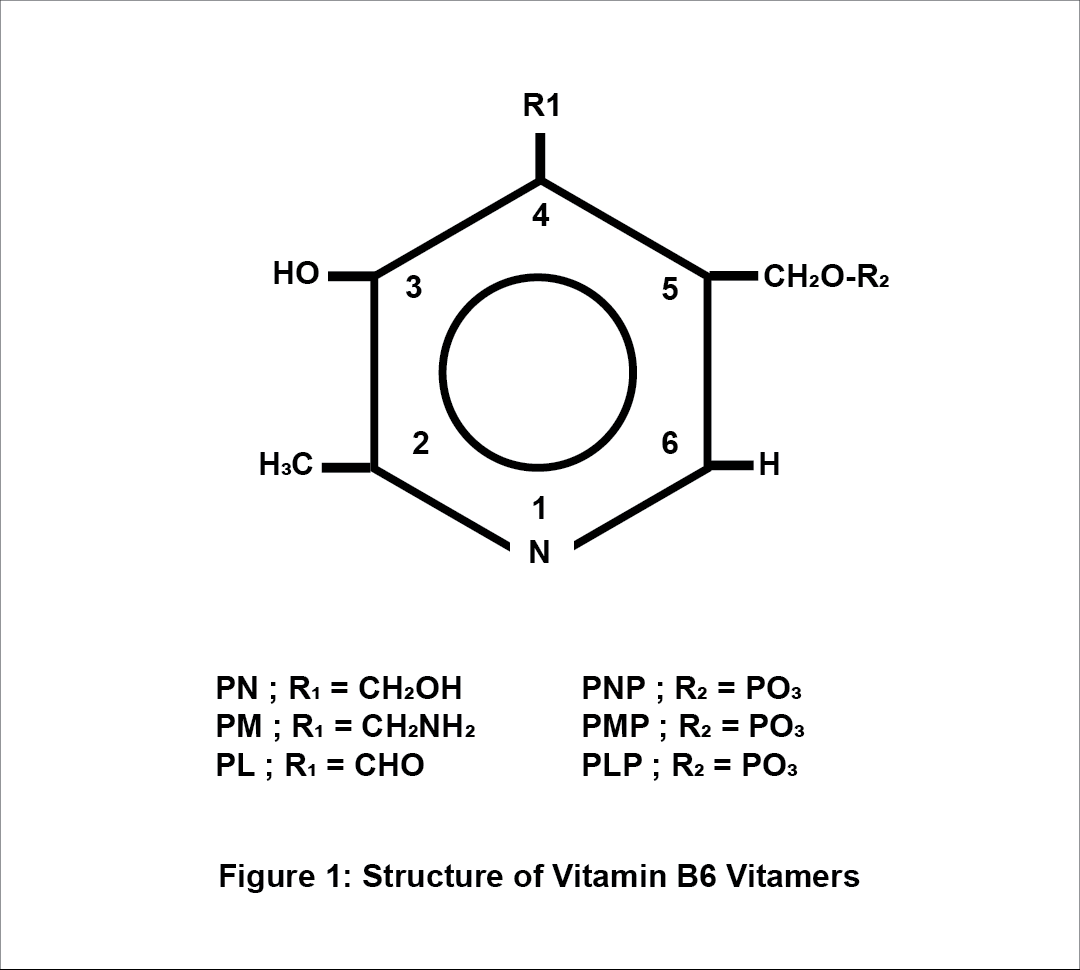 Metabolism of Vitamin B6

Humans and animals cannot synthesize vit. B6, hence they rely on external sources. [2] The absorption, through passive diffusion, takes place in the intestine and is divided into two parts: dietary ingestion that takes place in the small intestine (jejunum) and the uptake of bacteria produced vit. B6 that takes place in the large intestine. [3][9] The intestine absorbs only the nonphosphorylated B6 vitamers and, in the intracellular compartment of the intestine, most of them go to the liver and are converted to phosphorylated forms (PL to PLP by PL kinase for instance). [2][7][9] Absorption also requires phosphatase-mediated hydrolysis followed by transport of the nonphosphorylated form into the mucosal cell, regardless of dose. [2] PLP must be bound to serum albumin (ALB) as a Schiff base form and be delivered entirely from the liver as a PLP-albumin complex, which protects PLP from hydrolysis. [2][7][8][9] After these steps, the PLP-albumin complex requires dephosphorylation (by an alkaline phosphatase) to pyridoxal (less hydrophilic form) before being secreted into the circulatory blood system for delivery to the different tissues and organs, and even crossing the blood-brain barrier (BBB). [7][8] After the liver, the choroid plexus seems to be the only organ able to readily release PLP, which explains the relatively high percentage of PLP in cerebrospinal fluid. [7] After all these reactions, the B6 vitamers must be rephosphorylated by pyridoxal kinase in the brains cells and in other target cells too, found mostly in the mitochondria and the cytosol (where quite similar mechanisms occur). [2][7]

There is also a „salvage pathway” [7] for PLP formation from other forms such as PNP and PMP by oxidation by PNP oxidase. [2] PMP form is also generated from PLP via aminotransferase reactions. [2] PLP capacity of binding limits the accumulation in tissues and organs at high intakes of vit. B6. [2] If this capacity is exceeded, free PLP is rapidly hydrolyzed and nonphosphorylated forms of vit. B6 are released by the liver and other tissues into circulation. [2] At pharmacological doses of B6, the high capacities for PLP-protein binding of muscle, plasma, and erythrocytes (hemoglobin) allow them to accumulate very high levels of PLP when other tissues are saturated.[2]

B6 vitamers are excreted mainly in the urine, but also in feces. [2][7][9] When the intakes exceed the requirements, dephosphorylation of the pyridoxal phosphate takes part (mainly in the liver) and this is oxidized to the bioactive catabolite 4- pyridoxic acid (PA) – the main excretory product – and other forms or could also be excreted unchanged in urine [2][7][9] 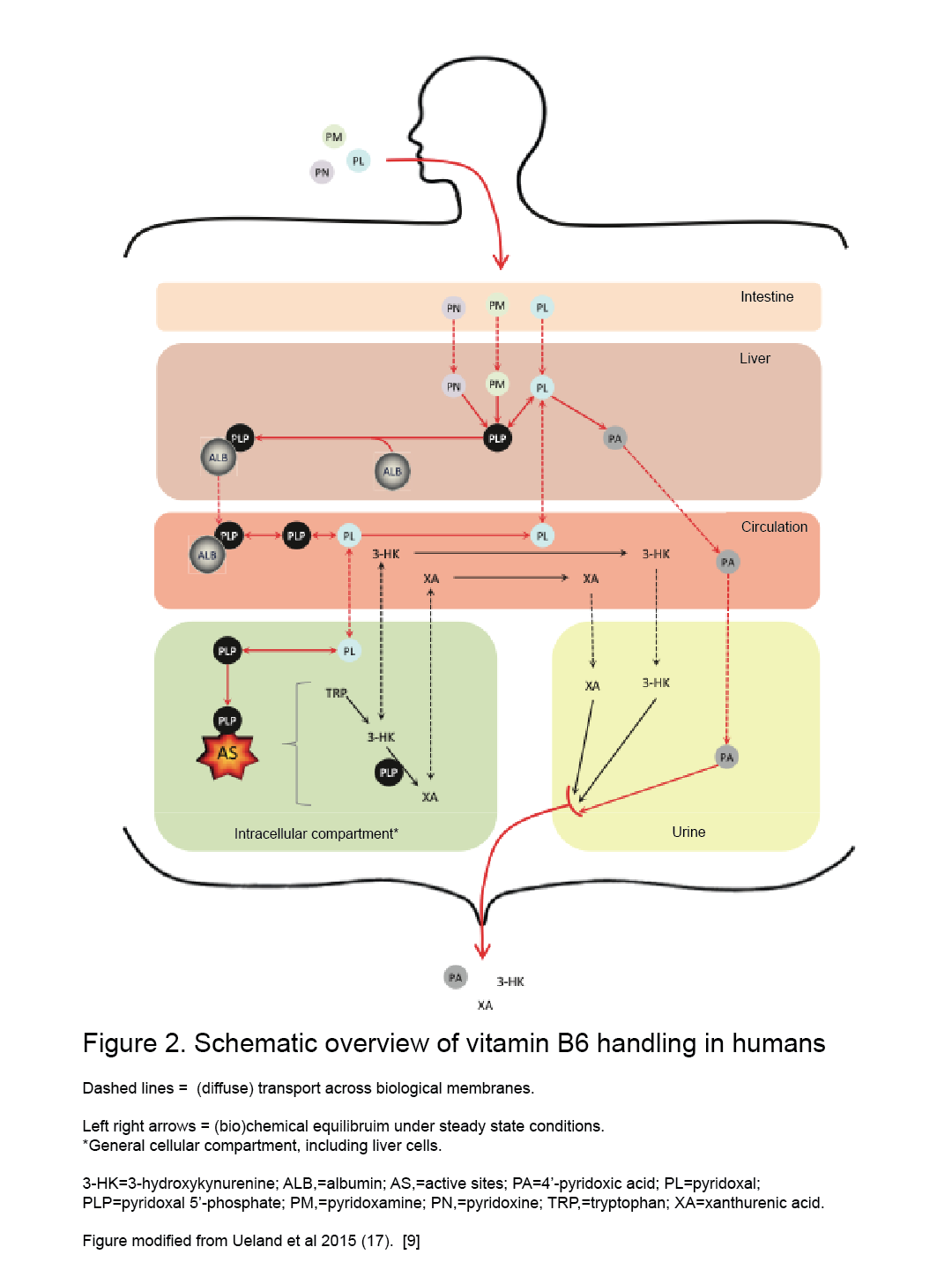 Functions of Vitamin B6:

Based on several studies vit. B6, in the form of pyridoxal 5’-phosphate (PLP), functions as a coenzyme for more than 100 essential enzymes-catalyzed reactions, mostly in amino acid, fat, and glucose metabolism [2][3] The biggest part of PLP in the body is found in muscle, bound to phosphorylase, up to 80% of the body’s stores – around 1,000 μmol or 167 mg. [2] The carbonyl group of PLP binds to proteins via a Schiff base. [2][4] The process begins by forming a Schiff base between a received amino acid, via its α-amino group, and the carbonyl group of PLP. [2][4] Thus, PLP is covalently linked to the active sites of aminotransferases, decarboxylases, racemases and dehydrases, among other enzymes. [2][4] The PLP-dependent enzymes are involved in lots of reactions, such as:

Vitamin B6  level was associated with different health issues ever since its first mention formula in 1932, by S. Ohdake, a Japanese scientist, when it was called “rat pellagra prevention factor” [3].[1] Clinical manifestations of deficiency and toxicity are less common due to its quick metabolization and excretion. [16] Usually, it has insignificant symptoms toxicity and deficiency-related, but when very high levels are administered or the intakes are inadequate, it can damage the nerves and also a significant part of the population could have inadequate levels of vitamin B6, despite apparently adequate levels of intake. [16]

Vitamin B6 and Skin Conditions:

Vitamin B6  is known for its important role in skin development and maintenance. [3] Even from the beginning of its research, some scientists investigated a “rat pellagra prevention factor” [3] that could cure a pellagra-like skin disorder in rats, called acrodynia.[3] They used a special yeast-based diet and noticed that acrodynia has been cured. [3] Although subsequent studies did not confirm the initial assumption that PN therapy could be beneficial in atopic dermatitis, other studies showed that prolonged exposure to vitamin B6  could be associated with dermatitis and increased photosensitivity in humans and cell cultures. [3][10] In other studies, despite its phototoxic effects, vit. B6  is thought to have a protective effect against photosensitivity in some microorganisms. [3][10] Furthermore vit. B6  supplements might also inhibit the growth of melanomas in vivo and in vitro studies. [3][10]

By its role in such a variety of metabolic reactions, including homocysteine degradation and serotonin biosynthesis, vit. B6  exerts lots of functions in the human body and has been associated with cancer, cardiovascular events, seizures, migraine, chronic pain, depression, cognitive failure, immune deficiency, irritable bowel syndrome, etc. [11]

Low PLP levels associated with hyperhomocysteinemia could have a role in cardiovascular disease. [2] Hyperhomocysteinemia is known for its roles as a cardiovascular risk factor (in atherosclerosis and congenital heart diseases), being a predictor of primary-cause vascular mortality and associated with mental retardation, seizures, depression, schizophrenia, and cognitive impairment. [2][8][16]

Low PLP levels were also associated with high levels of plasma C-reactive protein (CRP), an important inflammatory marker involved also in atherosclerosis pathogenesis. [6] This association between PLP levels and CRP plasma level supports the affirmation that inflammation has a significant role in linking low vit. B6 level and cardiovascular risk. [6] Another explanation of this affirmation could be the involvement of vit. B6 in the biosynthesis of the nucleic acids and mRNA and protein synthesis, consequently in the production of cytokines and inflammatory mediators during the inflammatory response that might increase the use of PLP. [6]

Vitamin B6’s role in diabetes mellitus can be explained by its benefits in endothelial dysfunction improvement, a factor involved in the arteriosclerosis progression and nephropathy related to this pathology. Vit. B6 can also have a „positive impact” [1] in diabetic nephropathy by preventing oxidative stress products formation and endothelial dysfunction improvement respectively. [1]

Vitamin B6’s role in serotonin metabolism may explain the correlation between vit. B6’s intake and its benefits related to inflammatory bowel syndrome symptoms. [11]

Vitamin B6 and other Clinical Correlations:

Some of the health issues associated with dietary levels of vit. B6 and their treatment efficacy are not very well known but some studies established some correlations between these:

Higher doses of vitamin B6 can be neurotoxic (as well as low doses). [4][5][12] The side effects of the high doses were related especially to PN intake and self-medication, but there is not clear yet what dose is safe to prevent toxicity and subsequent studies are needed. [4] It is thought that the duration of supplementation, genetic background, diet and medication use (dose of vit. B6, co-medication and so on) together play an important role in someone’s reaction to vitamin B6’s vitamers related side effects. [15] Neurologic, dermatologic and other side effects were identified: peripheral neuropathy associated with limb hypo-/areflexia and ataxia, sensory nerve damage associated with impaired limb touch sensation and tingling sensation, vesicular dermatosis and photosensitivity on sun-exposed skin regions, aggravated acne lesions, dizziness, nausea and breast tenderness. [4] [5][12]

Drug Interactions with Vitamin B6:

The treatment of some diseases and some conditions (inflammation) might affect the vit. B6 levels. These interactions result in the need for adjustment of the doses when are used together: phenytoin, phenobarbital, isoniazid, theophylline, MAO inhibitors, amiodarone, hydralazine, levodopa, low-dose of oral contraceptive, alcohol, antibiotics (cycloserine), penicillamine.[4][5][14][16] All these interactions affect, mainly, the central nervous system and the skin, but more studies are needed to explore in detail how exactly these factors affect plasma vitamin B6 level and if they create frank deficiency. [4][5][12][16]

Vitamin B6 is found within natural sources mainly as PLP and PNP (primary dietary forms) and plant-based sources contain mainly high amounts of glycosylated PN (with lower bioavailability which requires hydrolyzation to PN). [4] Its bioavailability is estimated at around 75% from a varied diet. [4]

Pharmacological Uses of Vitamin B6:

A series of studies were performed to identify the beneficial effects of vitamin B6 in the treatment of different conditions and their symptoms. Despite all its benefits, studies revealed that vitamin B6 has some of the benefits, indeed, but not always are truly effective:

Lately, the biosynthesis of vitamin B6 and its functional and metabolic characteristics as a coenzyme have been well studied and the information discovered has been confirmed or refuted by subsequent studies. The diversity of the most biologically active form of vitamin B6, the PLP form, implicated in a wide range of enzymatic reactions, is an indicator of the major importance of this vitamin and indicates several possible targets for future therapeutic approaches. Further studies are needed on the exact mechanism of how vitamin B6 may be more beneficial and needed in certain populations and conditions. Overall, with all the knowledge about the functional properties of vitamin B6 in different physiological and nutritional conditions, human health and well-being can benefit from them and this topic could also become part of the most challenging studies in the future.